BEI is the premier, state of the art maritime training center being built in the greater Norfolk, Virginia area. BEI’s focal point is the 1.4 Million gallon indoor pool and its one of a kind training assets. These include a 110′ three story live fire cargo ship, complete with a 30′ high engine rom to offer a 720 degree range, 30 reconfigurable shipping containers, and multiple “from water” climb heights for boardings. The offshore survival training assets include a 16 passenger Helicopter Underwater Egress Trainer, and a Small Craft Underwater Egress Trainer. In Support of offshore wind entering the United States market, a 12′ diameter, 30′ high above the water wind turbine tower will project from the pool to maximize the Global Wind Organization regulated safety training requirements. Atmospheric special effects include continuous waves up to 8′, maritime sounds, winds, lighting effects, rain and fog. Outside will be a three-story marinized firefighting training center. This computer controlled, propane generated facility will simulate a maritime platform complete with engine room, berthing and galley. The BEI campus will include an 80-room hotel and 80 seat dining facility.

“Providing a Harsh Maritime Training Environment, in a Controlled Indoor Facility” is why BEI exists! Whether military, government, commercial or recreational… the ocean does not discriminate.  BEI’s facility will provide the atmospheric effects to simulate these conditions, offering users a “crawl, walk, run” approach to government, military, or commercially regulated training requirements.

BEI will use proven technologies to provide up to 8’ continuous, variable set waves; maritime sound effects; winds up to 50 knots; fog; lighting to simulate any hour of the 24-hour spectrum; and rain.

Note: These sample videos above are courtesy of our friends at the Survival Systems Training LTD in Nova Scotia, Canada.*

BEI will offer the 110’ three story cargo ship “Shoot house” allowing users to conduct ship boarding’s indoors. The AR500 steel walls will allow up to 7.62mm ammunition to be used along with shotgun, mechanical, and thermal breaching of replaceable metal doors and hatches.  The ship will feature an engine room with 30’ ceiling height, the large space will have a mock ship engine with multi-level catwalks for a 720° live fire space.  The second deck will be berthing, and the top deck office spaces and ships bridge.

The ship’s hull is provided by a local shipyard and will feature the same hull materials, weld seams, and features used in commercial ship construction.  The hull continues 12’ below the waterline and curve in 6’ providing a realistic hull form for underwater hull training applications.  Additionally, a shaft, struts, and propeller will add additional training features.

Air operations in support of ship boarding’s are made possible via the 25’ x 25’ rooftop platform allowing users the ability to gain access to the ship via the roof top hatch after being inserted via helicopter.  A cat-walk will also run the centerline of the ship below the facilities ceiling allowing users to simulate a helicopter insertion via a ceiling mounted fast rope connection.

A sixty-foot by forty-foot area of the facilities pool will feature an undersea current capable of producing up to a 6 mile per hour current. This feature will support military, industry, and academia undersea training, research & development, and testing of existing and next generation submersibles. 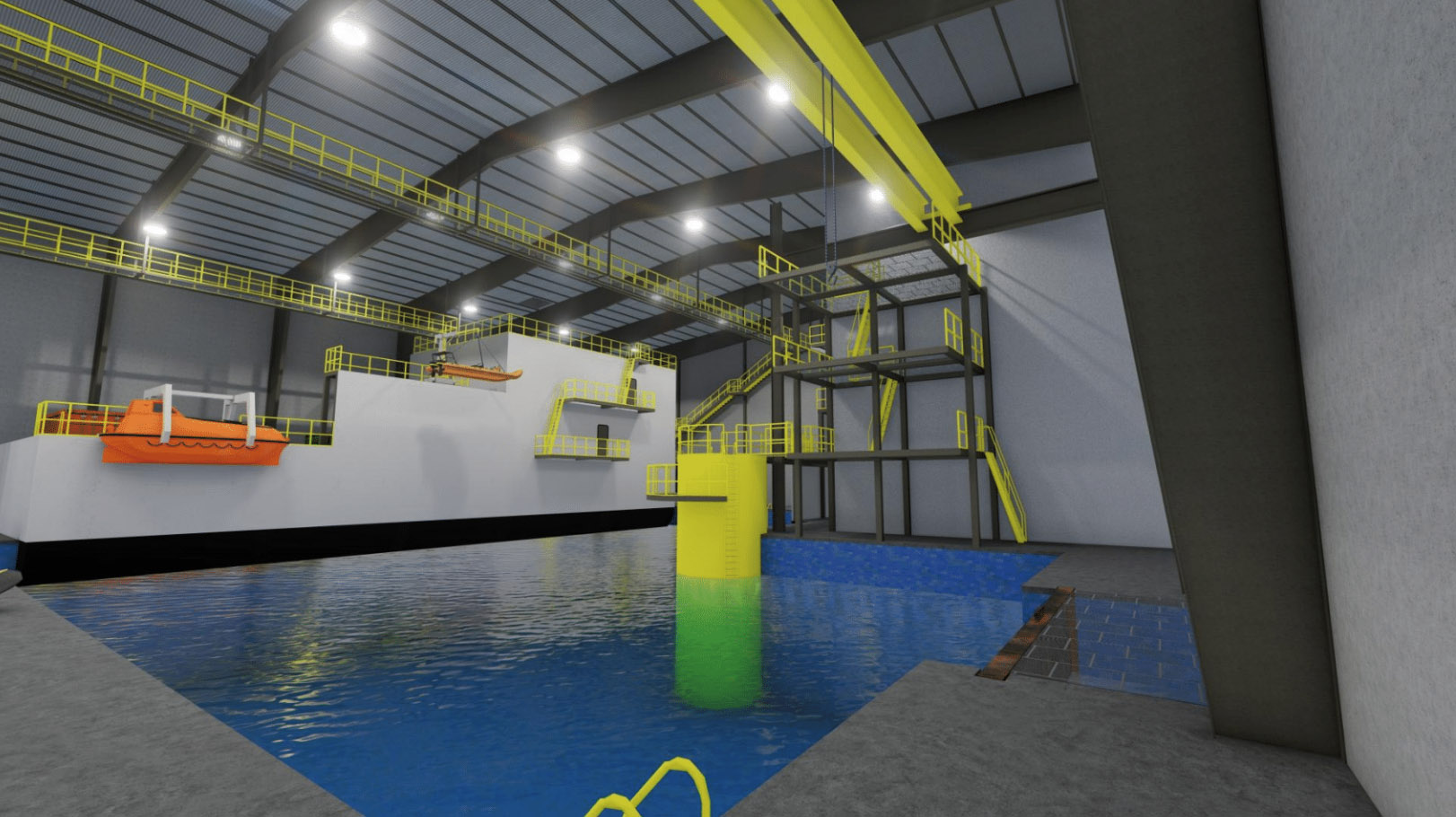 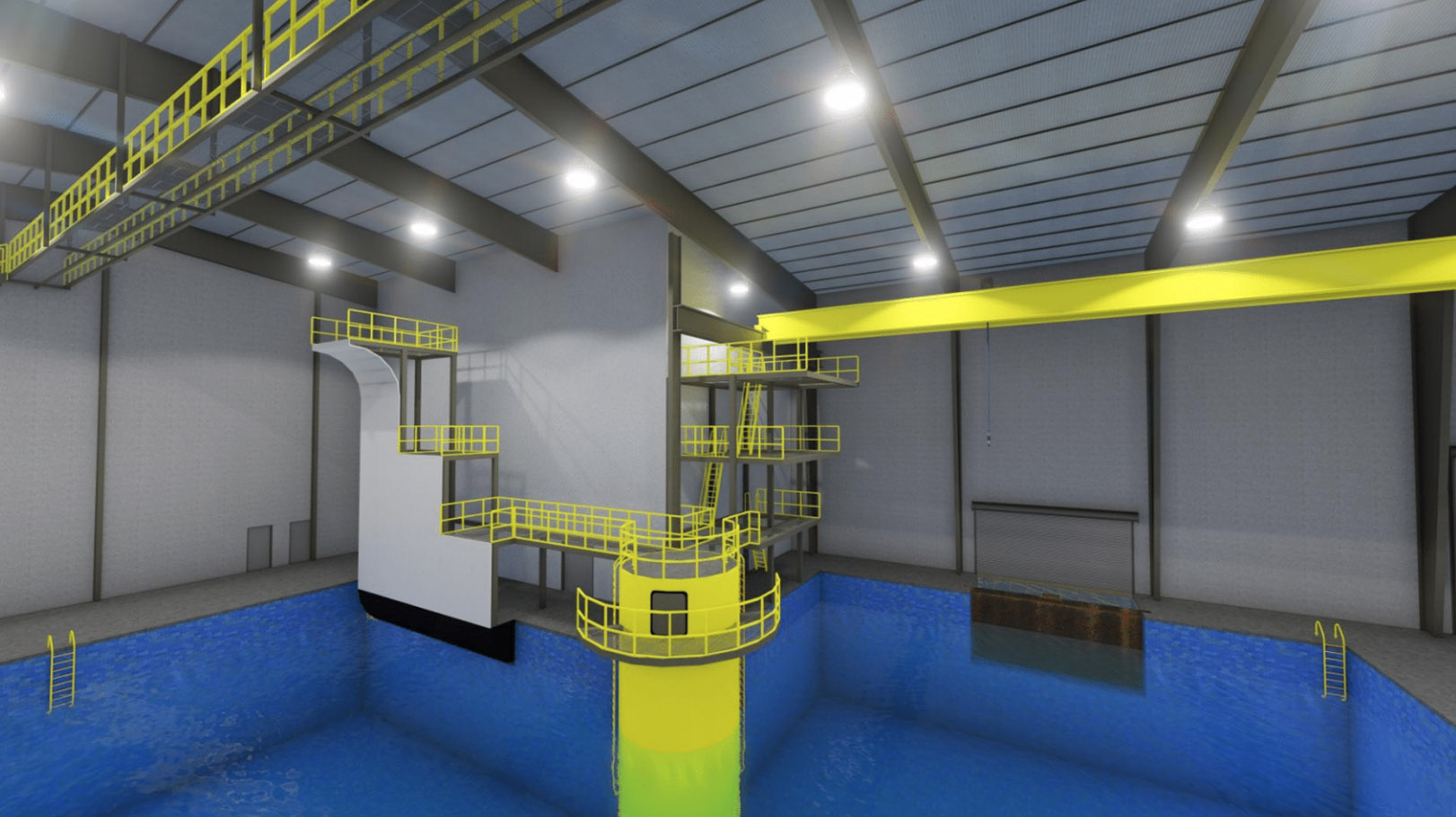 To add value to BEI’s facility and training courses, an 80-room hotel, and an 80-seat cafeteria will provide a turn-key solution for individual or group travel.  The Currituck Counties municipal airport passenger terminal is located less than a ¼ mile from BEI’s facility.  This airport proximity offers chartered and military aircraft direct access to BEI.  If required, Norfolk International Airport is less than an hour drive.

Are you open yet? No, BEI has recently (Spring 2019) entered investor phase, everything else is ready!

Who is your General Contractor? P.G. Harris

Who are your architects? HBA of Virginia Beach

How much will it cost to use? The regulated training will be competitively priced with industry standards.  For DoD/Law Enforcement use, those prices are being developed.

Can anyone stay at your hotel? Yes, but students will have first rights.  Other users include the Maple Park Sportsplex on the weekends, and Outer Banks travelers.

What branding will your hotel be sponsored by? None! Privately owned. We are not a destination hotel, so why pay the 25% fee to have a logo?

Can civilians use the DoD assets like the cargo ship? Not likely for liability reasons.

Can anyone take the offshore safety training? Everyone should! Yes

Can Fire Deptartments use the maritime fire fighting trainer? YES!

Why will they come?